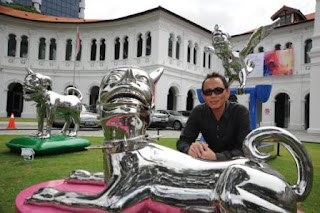 He was once considered the enfant terrible of Singapore’s nascent alternative art scene for his headline-grabbing art performances, including one in which he dressed up in a suit made of fake dollar bills and another involving his own urine. But nearly 20 years later, Vincent Leow is part of the art scene establishment. He was selected to represent Singapore at the 2007 Venice Biennale and his work is currently the subject of a mid-career review at 8Q sam, the contemporary art arm of the Singapore Art Museum, albeit minus the controversial early performances.

While Mr. Leow has drawn attention with his performances — in the case of his controversial Coffee Talk in 1992, in which he drank his own urine, he was trying to make a point about how artists are the producers and consumers of art — they have only been a small part of his practice.  “Tags and Treats,” now running at 8Q sam until Oct. 17, presents Mr. Leow’s paintings and sculptures, following his artistic trajectory from the angry, Expressionistic works he painted during his brief time in The Artist Village collective to the painterly explorations of texture and canvas structure created while pursuing a master’s degree in the United States. The show also includes some of his later satirical critiques of capitalism and consumerism. The works are presented chronologically to highlight how his style has transformed, mirroring or reacting to the various places he lived: from his early years studying fine art at the Maryland Institute in Baltimore (1989-’91) to the past three and a half years spent teaching painting at the College of Fine Arts and Design at the University of Sharjah in the United Arab Emirates .  Read the full IHT story