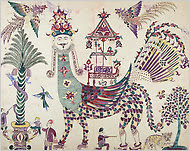 The Buraq is said to have transported the Prophet Muhammad on his over-night journey from Mecca to Jerusalem and back. It is described as having a white body half-mule and half-donkey, the wings of an eagle and the tail of a peacock. In a watercolor painting now on display at the Asian Civilisations Museum in Singapore, the Buraq is wearing Dutch clogs on its hooves along with traditional Southeast Asian gelang kaki anklets. The beast carries Islamic royal regalia in a canopy on its back, while two flying birds, similar to a Chinese phoenix, hover above him. To his side, there is a palm tree reminiscent of the Tree of Life motif, which is commonly found in Southeast Asian cultures.
Such an eclectic range of multicultural detail is unusual, especially in a painting that dates from the early 20th century. But this lively watercolor was painted in Aceh, on the island of Sumatra, and such details mirror the various cross-cultural influences on the Indonesian island for more than 2,500 years.
“For centuries, Sumatra was a crossroads for different cultures,” said Alan Chong, the director of the museum. “It was a point of arrival for new ideas and beliefs. We witness here a society extremely open to other cultures and other influences. Sumatra absorbed these and transformed them into new works of art, and I hope that is what our audiences will take away.”
“Sumatra: Isle of Gold,” on show through Nov. 7, examines how various cultures in Sumatra have influenced and, in turn, shaped others through interaction with foreign traders and colonists. Read the full story in IHT