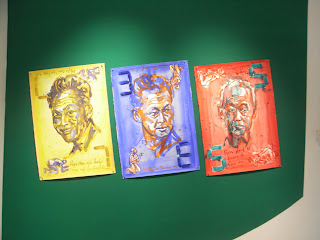 Valentine Willie Fine Art Singapore's annual survey of Singapore artists addresses the theme of Singapore beyond LKY. “I wanted to prod Singaporean artists to contemplate a future without LKY. To consider it now and not wait till that dark day. I am certain the machinery of governance are well prepared for that eventuality but are the heartlanders?,” said curator Valentine Willie. Their response interestingly varies greatly depending on their generation; while older artists took on the subject on a very emotional level, often opting to represent the man himself, the younger generation appears very detached, their life already more shaped by technology than by LKY. 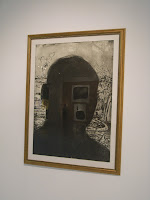 I especially like two works by Jimmy Ong, one in his traditional style of black and white charcoal (it portrays two women, a mother and daughter, but their faces are that of LKY) which questions, what would have happened if Lee Kuan Yew had been a woman, would he have nurtured the nation differently? The other work, more unusual for Ong as it uses colour, has three watercolour portraits of LKY at various stage of his life are presented as playing cards over a green baize of a gaming table. Across the works are lines uttered by Barbra Streisand in Yentl, such as Papa Can You Hear Me? Ong, who now lives in New York, and is well known for what the Singaporeans would euphemistically call an "alternative" lifestyle. 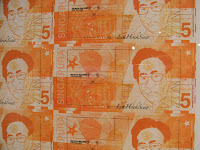 Vincent Leow offers another powerful portrait, a black silhouette of LKY's head looming large in the painting. I only wish the artist had made more of the landscape in the background. Another very interesting works is Green Zeng’s Malayan Exchange (study of a note of the future), where the artist printed a fictitious currency using the portrait of former leftist leader and political detainee Dr. Lim Hock Siew instead of Singapore former president Yusof Ishak.
Asian Art Singapore