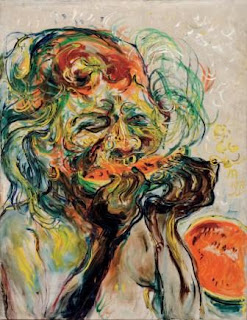 Indonesian old masters stole the show at Larasati Auctioneer’s auction in Singapore last Saturday. Affandi’s “Tanah Lot” went under the hammer for S$240,000 and his “self portrait eating a watermelon” fetched S$264,000, both exceeding estimates by almost four times. This confirms the recent trend of Asian collectors’ clear preference for blue chip artists. Medan, Indonesia born Rusli, was the first in a series of highly contested modern masters lots. The 1967 oil on canvas painting of a “Temple Festival” finally went under the hammer at S$31,200, at least 260% above estimate. Hendra Gunawan, artist, poet, and once, a freedom fighter, is best known for his vivid oil paintings. Many of his works were lost when he was incarcerated in the sixties. His “Fishermen under the Shade of a Tree”, painted in 1978 which is the year he was released, sold for S$72,000, 160% above estimate. Commenting on the buying trend in this auction, Larasati CEO Daniel Komala said, “Buyers know exactly what they want. They are going for the blue-chips pieces by the modern masters who have a limited supply and an established track record. Buyers are also more discerning as they go into the details, and rally around known artists and their works created at specific times. You can be sure that these exacting tastes on quality also mean that they (the art works) are going to fetch extraordinary prices.”