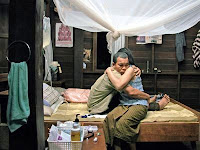 Thai film "Uncle Boonmee Who Can Recall His Past Lives" directed by Apichatpong Weerasethakul won the Palme d'Or at the Cannes Film Festival. The film traces the dreamlike final days of a man dying of kidney failure as the ghost of his dead wife 'visits' him, along with his long-lost son who has returned in a non-human form. It's the first Asian film to have won the Palme since 1997.
Asian films