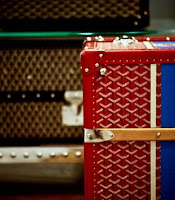 La Maison Goyard, the luxury trunk maker company founded in 1853 in Paris, will open a 780 square foot retail space in the Peninsula Hotel in Hong Kong the first quarter of 2011. The deal was announced by Singaporean company FJ Benjamin which has obtained the rights to retail Goyard in Hong Kong (and in Singapore upon certain conditions being met). The brand is best known for the quality of its hard-sided trunks with its distinctive motif with chevrons juxtaposed to form a Y. The fabric is made of linen, cotton and hemp woven together, and carefully treated in a painstaking manual process in its workshop at Carcassone, France, which also produceS made-to-order pieces. The family business was acquired in 1998 by Jean-Michel Signoles, an entrepreneur who created French children's clothing brand Chipie. He introduced new colors -- such as white, blue and green to brighten Goyard's traditional collection of dark colours. So far Goyard is located in only 10 cities outside its flagship Paris base: Beverly Hills, Boston, Kyoto, London, New York, Osaka, San Francisco, Sao Paolo, Seoul and Tokyo.
Luxury