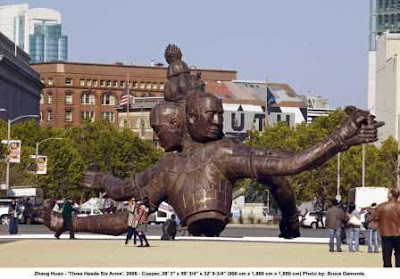 San Francisco has a new temporary sculpture by celebrated Chinese artist Zhang Huan. Presented in conjunction with the Shanghai-San Francisco Sister City 30th Anniversary Celebration, Zhang’s colossal Three Heads Six Arms (2008) is on loan, courtesy of the artist and The Pace Gallery, New York, through 2011. Three Heads Six Arms is part of a series of monumental works depicting the fragmented extremities of Buddhist statues. The series was inspired by Zhang’s discovery of religious sculptures that had been destroyed during the Cultural Revolution for sale in a Tibetan market. He began the series in 2006 shortly after moving from New York City to Shanghai where he stopped his performance art practice and embraced a more traditional approach to artistic creation. His recent work has been characterized by a more overt relationship with traditional Chinese culture and Buddhist iconography. However, he continues to use the body as a primary vehicle for exploring existential questions and expressing emotions, and it is a common thematic thread through his various artworks. Standing over 26 feet tall and weighing almost fifteen tons, Three Heads Six Arms is Zhang’s largest sculpture to date. The sculpture was created by welding together a steel structure and overlaying it with clay, which is then covered with a copper skin.
Asian Art Chinese art